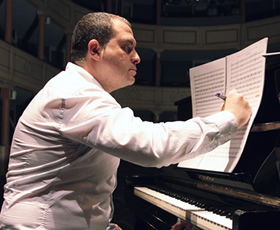 David Rivas hails from Toro (Zamora, Spain) and is a tenured music teacher at secondary school level in Castile and Leon since 2006. He currently teaches at the Toro Secondary School.

Although he started composition as an amateur, David is now a very prolific composer with more than 140 published compositions for various ensembles and soloists. His music has been premiered in Argentina, Mexico, Portugal, Peru, Greece, Italy, Brazil, France, England, Germany, Ecuador, Japan, USA, Colombia, Holland and Taiwan.
Recent years brought international acclaim to David with some of his compositions chosen as mandatory pieces in Spanish Wind Band Competitions in Valencia, Murcia and Galicia.

2019 was a wonderful year for David not only due to the recording of a CD Monographic with the Bilbao Symphony Wind Band, under the baton of the maestro Pascual-Vilaplana, but also thanks to being awarded a prestigious Jerry Goldsmith Award as the composer of “Los últimos días de Troya” (The last days of Troy). In 2020, Rivas won a Bronze Medal Global Music Award thanks to his work “Delirium tremens”.

Since 2017, David Rivas is an Excellence in Culture Fellow of the Caja Rural Scientific Foundation. He balances his life as an educator and composer, the presidency at the “Lopez Cobos” Music Society in Toro and a busy agenda as guest conductor, jury and composer all around Spain.